Full results can be found HERE

Some great photos are posted on the SCA website in the Photo Gallery: http://www.sonar.org/

The following is a write-up of the regatta by Peter:

"Short on numbers but long in talent and great racing"

It wasn't what we expected. Maybe it was the dates or maybe it was the distance. But then maybe it was something else. In any case the attendance at this year's North Americans was one of the lowest in memory. But 12 yachts showed up to contest the title.

And that was a pity because Skip Shumway and the Rochester YC put together a superb event and even the weather…CLICK HERE for the full report.

The New England Championships took place on August 4-5. This year's regatta was hosted by the Falmouth Yacht Club in Falmouth, MA. A total of nine races were completed over the two days with 18 boats participating.

Karl Ziegler and Team 360 came out on top finishing with 18 point (after the throw-out). Second place was Rocky Geyer & Jim Tietje. Third went to Alex Meleney.

FINAL REPORT
Noroton Yacht Club, which won the event in 2010, was victorious again in the second sailing of the Grandmasters Invitational Team Race at Harbour Court last weekend. In addition to NYYC, the participants were American YC, Eastern YC, Noroton YC, Southern YC, St. Francis YC, St. Petersburg YC, and Texas Corinthian YC. Last year’s event was cancelled due to the pending arrival of hurricane Irene. The Commodore Stewart Cup was awarded to Peter Wilson, Noroton Captain, on Sunday afternoon after his team defeated NYYC in the final race of the medal round. The Commodore Stewart Cup was originally awarded by NYYC Commodore W.A.W. Stewart to the yacht Seven Seas in 1938 and was recently dedicated for the Grandmasters Invitational...

For a full report and complete results, CLICK HERE

This will be the last opportunity in 2012 for some great fleet racing in what is expected to be a fairly large group of entries.

The NOR and online registration is now available at http://www.sonar.org/

The Kirby Cup, hosted by Noroton YC will take place on September 15-16. Teams for the Kirby Cup, the SCA's team race championships, are set:

New York Yacht Club is the defending champion but with six fairly even, competitive teams, holding on to that title will be difficult!

The Photo Gallery on the class website (http://www.sonar.org/) has over 230 images in 10 different albums including shots from this year's North American's - like this: 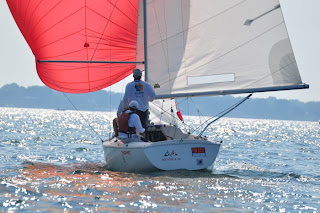