The North Americans are only six weeks away. Time to make your plans, reserve your lodging and, most importantly - register! You can register online at: http://www.sonar.org/

The sonar class will, once again, participate in the Marblehead NOOD regatta hosted by Eastern YC, taking place on July 28-29. This year, there are crews coming from as far as San Francisco to get time on the Sonar in preparation for the NYYC Invitational. Expect a strong fleet, great racing and a terrific after-race party!
Register here: http://www.sailingworld.com/nood-regattas/marblehead
NEW ENGLAND CHAMPIONSHIPS:
The 2012 New England Championships are being hosted by the Falmouth Yacht Club, Falmouth MA. on August 4-5. Racing will take place on the waters of Vineyard Sound between Cape Cod and Martha's Vineyard. This regatta is only three weeks away! Register today on http://www.sonar.org/
RESULTS:
C. Thomas Clagett Jr. Memorial Clinic and Regatta 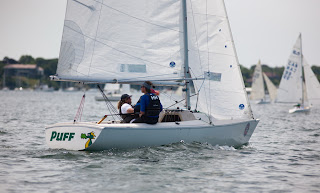 NEWPORT, R.I. (July 9, 2012) – Against the backdrop of over a dozen vessels assembling for the Ocean State Tall Ships Parade of Sail, competitors got down to business on the final day of racing at the 10th annual C. Thomas Clagett Jr. Memorial Clinic and Regatta.
A hard-fought battle took place on the Sonar course where Paralympians and reigning world champions Aleksander Wang-Hansen, Per Eugen Kristianson and Marie Solberg (all Oslo, Norway) had started the day with the lead of the standings – while tied on points – with 2008 Paralympian Rick Doerr (Clifton, N.J.) and crew Gerry Tiernan (Falmouth, Maine) and Hugh Freund (S Freeport, Maine). With the Norwegian team posting finishes of 2-1, and Doerr’s team finishing 3-2, the Norwegians prevailed to take their first class win at The Clagett with 13 points, just one point ahead of Doerr, Tiernan and Freund. The USA’s representatives to the Paralympic Games remained third overall, 12 points out of first place, despite finishing 1-3 in today’s racing. Paul Callahan (Newport, R.I. /Cape Coral, Fla.), Tom Brown (Castine, Maine) and Brad Johnson (Ft. Lauderdale, Fla.), will compete for the first time as a team at the Paralympic Games, although all three have competed in a previous Paralympics. Richard Ramos (Medford, Mass.), Cindy Walker (Abington, Mass.), Duncan Gillespie (Charlestown, Mass.) and Steve Jewett (Winthrop, Mass.) were fourth overall with 37 points.
For complete scores, photos and additional information, visit www.clagettregatta.org
2012 Atlantic Coast Championships: 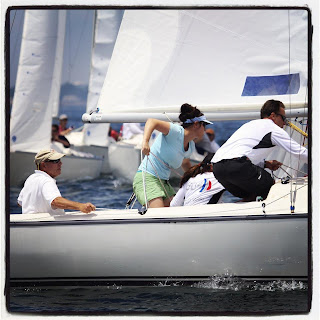 http://sonarclass.blogspot.com/
Posted by Unknown at 8:49 AM No comments: