Sailing season is almost upon those of us who live in the northern climes. Lots going on. Now is the time to plan to attend the great and fun regattas scheduled for 2017. 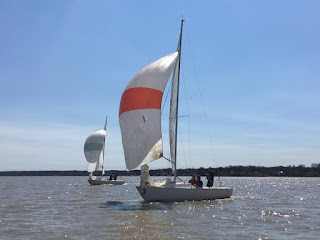 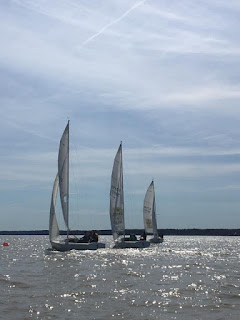 The sailing season at RYC officially kicked off this past weekend with our Sonar Frostbite Series.  (Yes, we might have frost until the end of April.)  We are actively working to incorporate the six club boats that arrived in Rochester last fall from St. Pete into our local fleet.  Skip Shumway had the great idea to have some early season sailing before our racing kicks into gear in mid-May.  The hope is to engage some non-Sonar sailors and/or non-racer club members in some low-impact racing with our existing fleet members helping as coaches.  Fortunately, we were blessed with an early summerlike day with winds out of the south at nine knots and temperatures in the low-70s.  It made for such a beautiful day that the sailors didn’t want to come in off the water.  With three of our new Sonars on the line with five newbies onboard, we were able to get six races off.  Not bad for an idea that was hatched just a few snowy weeks ago.

The club is also offering the boats for charter during the season for our more competitive Tuesday night One-Design racing.  Skippers will organize their own teams and compete in one or more series throughout the season.  Wednesday is the club’s Offshore night but we are looking to add a start for the Sonars.  With a coach or two on each of the boats this will afford members a more casual racing experience and a chance to learn a new position.  It’s the next step in our On Ramp To Racing program in which participants engage in two nights of classroom learning followed by a long weekend of coaching and drills.

We’re really hoping these boats act as a stepping-stone for some club members to permanently join the fleet once they realize what a great boat the Sonar is.  But, in the short-term our focus is on just getting them used on a regular basis alongside our fleet of privately owed boats.

Seawanhaka Corinthian YC owns 12 Sonars that they use for Team, Match and occasionally fleet racing in matched boats. We also have 12 privately owned boats and, just down the road, 10 new Rondar boats at the Waterfront Center.  The contact there is David Waldo.

Overall, our fleet recently sold three boats to New Bedford YC who is putting together a club owned fleet of their own.  Our fleet is split between the Sunday Fleet racers, mostly dry sailed, and Ladies Sailing, mostly bottom painted, who go out on Wednesday.  And of course, there are some people who sail in both fleets. Where we have been having success is getting the OD Sonars to come out for the PHRF Fleet Distance Race events, they use a pursuit start and the Sonars start first, typically finish in the top of the fleet and regularly win overall.

Here's a summary from a really fun, creative Fleet 23 meeting...

Following the example set last year with the Christmas Train Italian Dinner Extravaganza Sonar Fleet 23 once again ventured into new territory;  We Got Naked At The Met.   We can learn a lot about our sport by analyzing what went on in this somewhat bizarre event.

It  wasn’t easy getting the gang into one spot but Holly managed to actually get a bunch of us into the visitor center at The Met on time.  It wasn’t easy given last minute glitches over ticketing, our general lack of cohesion, and Greek Independence Day clogging up 5th Avenue, but there we were.  Lesson #1 - Surround yourself with competent women and do as you’re told – things will work out.

After a brief Skipper’s meeting (apparently everyone was a skipper) we divided into teams based on several different theories and formulae.  I will not go into the sordid details but we managed to get into foursomes, some of us actually listened to the instructions and off we went to find 22 naked things in 90 minutes.  90 minutes seemed like a lot at this point but that actually translates in to something naked every 4.0909 minutes.  Lesson #2 – Do the math.

Our Team “Beauties and 2 Beasts”, thanks a lot Rita,  headed out through Greeks and Romans, traversed Oceana, and entered Modern Art looking for an Army occupying a Glory Hole.  I found the painting but didn't pay much attention and picked the wrong army.  Rita looked more closely and got the right one.  Lesson #3 -  Crews work best together.

And so it went through painting, sculpture, bizarre gable hangings.  We were finding things and puzzling over others when it hit us – 45 minutes were gone and we hadn’t made it half way.  Lesson #4 – Use your time wisely and move on if things are not working out.

A real  eye opener was the “three nudes and the gentleman seeking crumpet”.    We spent way too much time but every one of us came up with part of the answer.  It was really gratifying to work it out together.  Lesson #5 – Crew’s are made up of individuals but work best as one.

Another revelation came over the “husband’s kiss raising his blood pressure”.    We found the right painting but initially had the wrong answer.  Lesson #6 – Read the instructions!

We only made 16 of the 22 stops but we really enjoyed the ones we made.  I think that if you race boats there is just something in you that likes to compete.  We would have been wiser if we had paid attention to Lesson #4.

In any case we got back, the scores were tallied, and the winning team was Holly, Janet, Butch, and Joe under the nom de guerre of "Sailors and Boat Bunnies".  Congratulations.  Have you taken off the Medals yet?


Then it was off to the Sonar beer cooler, I mean restaurant, where a good time was had by all.  Lesson #7 – When it’s over it’s not really over, there’s almost always beer.


2017 is highlighted by our World Championships, hosted by the Lunenburg Yacht Club in Lunenburg. Nova Scotia, Canada. The event will take place from September 6- 10.

Articles on speed, trim and tactical tips can be found by going to the class website then clicking on the Library tab in the left nav bar. Once there, click on Articles then either the Speed & Trim or Tactical Tips folders.

https://twitter.com/SonarClass
Posted by Unknown at 10:34 AM No comments: