A stand-out performance of the weekend came from Paralympic silver medalist Rick Doerr, of Clifton, N.J., and his crew on the Sonar “Valiant.” “We kept it as consistent as possible, which I think gave us a huge advantage,” Doerr said. “There were a couple of times when the racing was really close and boats were gaining on us, but we were very patient and everyone was doing their jobs. We were really impressed with our ability to get right back into the groove of things, having been away from it since September.”

Doerr’s tactician, Brad Kendall, is a Clearwater, Florida, native who is used to sailing on Tampa Bay. He commented that the team had fun despite tricky weather this weekend and added that it’s “always a good feeling” to win on his home turf.

For those who haven't been able to experience the joy of the Sonar Midwinters, where St. Petersburg can offer temps in the mid 70's and gentle breezes in the 6-10 kt range, this year was another one of those classics with added rewards. This year, we were privileged to have Wounded Warriors, Paralympic medalists, local junior sailors and the grandmaster himself, Gene Hinkel, all join the fleet. Spending time with dedicated service men and women, brave soldiers who have sacrificed so much for our country, was truly inspirational. We inspired each other on the water (gotta see their huge smiles).

As for the racing, Gene Hinkel was able to provide all the boats with whisker poles and to facilitate competition, the event was sailed under Appendix B of the Sonar Class rules. The junior sailors especially excelled at this, as did the old and new. Two races were sailed on day one, with the first coming from an NW outflow before yielding after a lunchtime postponement to a SW sea breeze. Day two saw more of the same, but after the morning race, threatening thunderstorms forced the RC to send everyone back to the dock until it blew through. Racing resumed in the mid afternoon with one race in a freshening breeze. Although day three was forecast to provide a fresh NW, morning fog forced a postponement until close to noon, and only one race was possible prior to the Sunday afternoon deadline.

With close racing, Team Valiant/ USA 674 finished first, followed by Team 694, John Twomey/ IRE in second and Team Pingrr with local junior sailing sensation JJ Smith at the helm in third. While it was an emotional moment for USA 674, parting ways after nearly 15 years of competition and the boat moving on after all these years, the prize giving was highlighted with the presentation of the prestigious Gay Lynn Memorial trophy, US Sailing's highest honor for outstanding contribution to adaptive sailing. Present were past recipients Peter Goldman, Jen French and St. Pete's own Gene Hinkel, who has done more to promote adaptive sailing in this country and abroad, as well as continue to support the Sonar Class from the bottom up as Class IM and as Bo'sun extraordinaire to all fleets.

The Gay S. Lynn Memorial Trophy is the highest award presented by the Committee for Sailors with Disabilities and is given annually to a person, volunteer, professional, or a organization, that is recognized as having made an outstanding contribution to disabled sailors and the sport of adaptive sailing over a sustained period of time. The award is given out  at either US Sailing’s Annual Meeting or a major adaptive sailing event.

Each year, the TZC includes an adaptive sailing clinic. It is a program put together by Jan Crittenden between NBC, Sonar fleet 23, and The Helen Hayes Hospital to promote sailing to people with disabilities and to rehabilitation professionals.

Then racing Saturday and Sunday, bookending a very enjoyable cocktail party with hors d'oeuvres made by fleet members and Dark ’n Stormy's as the featured drink.

We can't think of a better way to spend the weekend! 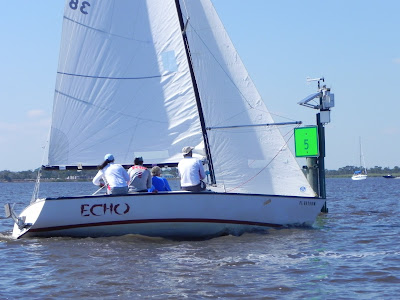 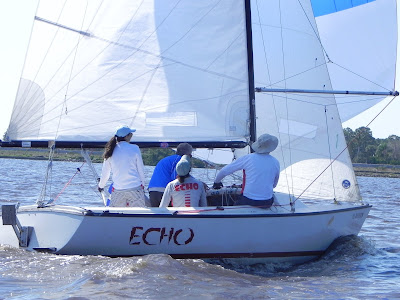 Fleet 36 is growing and we are in the middle of our season here in Stuart, Fl. We have 9-10 Sonars and usually have between 5-7 boats out every Sat. We race W/L's in the St. Lucie River using a customized rabbit start process that works very well and no race committee with flags and horns. We usually get in 4-5 races, in pretty flat water and 9-20 kts of wind. All boats are dry sailed from 2 local marinas using large fork lifts. After racing, we all meet at a local fish taco bar to compare notes and settle disputes.

If anyone is traveling to Florida and would like to come over on a Sat, perhaps we can find a spot for you if you want to race and party with us. Just put the word out and let me know.

We also have one boat for sale...not sure of the price, probably $5-6K. If someone wants to buy the boat and fly down anytime and race we can probably arrange rack space for around $200/mo. including launching and hauling and wash down. We race 52 weeks a year unless bad weather.

The polars for the Sonar can be found on the SCA website. To access them, from the homepage, select Library -> Literature. It's easy. Check it out, there is a ton of great information included with this document.

We have a number of ways to stay in touch with the class and our members.

Our website includes a forums area in the Member's Only section: http://www.sonar.org/

https://twitter.com/SonarClass
Posted by Unknown at 7:45 AM No comments: