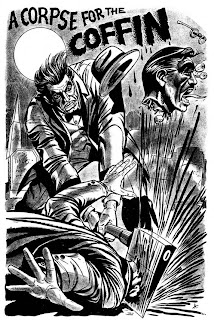 For those who missed it...

I am happy to announce the following:

At our recent AGM, conducted on Oct 1, 2011, a vote was taken to change the membership structure and dues for the Sonar Class Association, beginning in 2012.

Beginning in 2012 there will only be one level of membership. That level will be called Active. The Associate Member level will no longer exist.

Beginning in 2012, to race in an SCA sanctioned event, only the "Person in Charge" of a registered boat is required to be an Active member. The Person in Charge is defined as the person responsible for the registration and any liability or pecuniary obligation resulting from participating in the event.

By now most of you know that Steve Shepstone from Fleet 1 is our new World Champion. The World Championship was held this past August in Rhu, Scotland, hosted by the Royal Northern & Clyde Yacht Club.

What most of you have not seen is this account of his planning, preparation and execution for his campaign to with the regatta:

For full results of the Worlds, click here: http://www.uksonar.info/textdoc.aspx?pg=33&m=8


The Sonar European Championships, a "pre-worlds" regatta hosted by The Royal Northern and Clyde Yacht Club in Scotland, was held August 18 -21.

The regatta was won by Skip Shumway. Second went to Simon Barter from Great Britain while third went to Steve Shepstone.

Here is a link to the full results: http://rncyc.com/sailing/racing/results/


The 2011 North American Championships, hosted by Fleet 5 and the Wayzata Yacht Club took place on Lake Minnetonka, Minnesota, from September 23-25.

27 boats competed, including three from Canada. A total of five races were completed. After four races, Peter Galloway from Noroton Yacht Club's Fleet 1 and Skip Shumway from Fleet 9 and Shumway Marine, were battling for first, with Skip only two points behind Peter. Unfortunately for Skip, time ran out...he had to leave and miss the last race. It would not have mattered though because Peter Galloway took his fourth gun in five races and sealed the victory.

Coming in Second was Ernest Brody while third went to Martin and Kathy Fossen.

Noroton YC hosted the Sonar ACC's on October 1-2. 23 boats participated in a variety of conditions.

Saturday saw gusty winds out of the north. The breeze varied between 8 and 18 knots making for quite a challenge. PRO Chris Zaleski and his RC did a tremendous job getting in four races. Unfortunately, at the end of the day, the first race was thrown out leaving three races and a lot of smiles at the dock after racing (except for Scott Harrison who won the first race :-)).

Sunday was really interesting. The first race started in about 10 kts but the wind slowly died out. 19 boats managed to finish before the time limit expired. Then we drifted around for over an hour waiting for the breeze to return. When it did, it did! The wind went back to the mid teens and allowed Chris to get two more races in before calling it a day.

With six races completed, allowing for one throw-out the winner of the 2011 ACCs was Peter Galloway with 14 points. Second went to Rick Dominique from fleet 22 who finished with 15 points. Third was Scott Harrison with 20.

Full results can be seen at the Noroton YC website (When there go to Regatta Info and Results).

Some photos from the ACCs: 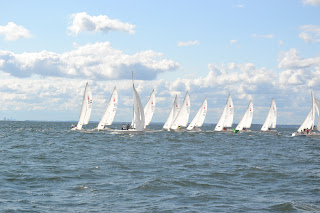 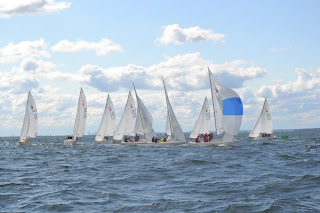 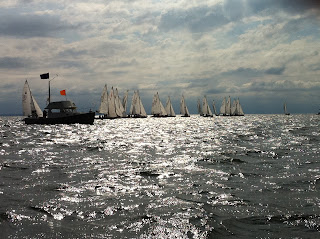 2011 was a high mileage, successful year for members of Sonar Fleet 1. In addition to Shepstone's World Championship victory and Peter Galloway's win at the North Americans, Rick Doerr prevailed at the the US Disabled Sailing Championship held at Larchmont YC on September 22-25.
Rick was quoted in US Sailing...“It was a challenge all weekend,” said Doerr. “The breeze was up and down, and there was a ton of current. I think we did a good job keeping the competition in our sights. We wanted to make a statement that to go through the Trials you have to go through us.”
MARK YOUR CLAENDARS (in pencil):
The following is our 2012 sanctioned regatta/team race schedule. Not all are 100% confirmed...there might be some tweaking of dates...but otherwise you can begin to plan based on what's here.
2012 FLEET RACE SCHEDULE:
Tappan Zee Challenge, Nyack NY, Nyack Boat Club, May 19-20
ACCs, Eastern YC, Marblehead, June 23-24
Marblehead NOOD, July 28-29
New Englands, Martha's Vineyard, MA, Vineyard Haven YC, Aug 3-5
North Americans, Rochester NY, Rochester YC, August 23-26
LIS Championships, Darien, CT, Noroton YC, September 29-30
2012 TEAM RACE SCHEDULE:
Master Driver, St. Petersburg,  Jan 28-29
Texas Shoot-out Team Race, TCYC, Mar 24-25
Jackson Cup, Marblehead, Apr 14-15
Oyster Bay Challenge, May 12-13
Morgan Cup, NYYC, Aug 11-12
Hinman Masters, NYYC, Aug 18-19
Grand Masters, NYYC Aug 25-26
Kirby Cup, Noroton, Sep 15-16
Lee Trophy, Seawanhaka, Oct 6-7
Halloween Cup, Marblehead, Oct 28-29
HAVE A GREAT WINTER EVERYONE.
Posted by Unknown at 12:11 PM No comments: