For those who have not renewed their class membership, access to the Members Only area of the class site is no longer available. To renew online, go to www.sonar.org and click on the "Membership" tab in the left column.
MARBLEHEAD SONAR FLEET WINS THE TEXAS "SHOOTOUT" TEAM RACING TITLE: 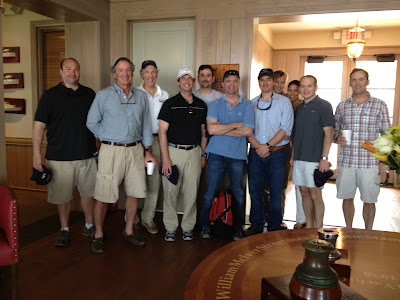 Ted Moore, Pete DeWolfe, Patrick Andreasen, Tim Guy, Tyler Doyle, Chris Boulter, Nyla Dubois, Larry Ehrhardt, Daan Goedkoop, Jeff Shoreman, and Charlie Pendleton sailed for Marblehead.
Saturday’s racing started late due to light winds giving the Marblehead Team a chance to enjoy the Veranda at the club and recover from Friday nights ride on the “Bullet” roller coaster after a large steak dinner.  Once the wind came up the race committee was able to complete an entire round robin with the last race finishing just 15 minutes before dusk at 7:30 PM.  The Marblehead team used a combination of good starts, boatspeed and little bit of team racing to go 5 – 0 on day 1.
Sunday’s conditions were slightly better with a moderate breeze allowing for another full round robin.  The TCYC team was just behind the Marblehead team with a score of 4-1 after day one so the second match between these two teams would determine the outcome of the regatta.  At the top mark, the Marblehead team had a tenuous lead with a 1,3,5 combination; however, after a good wing mark trap, some downwind pair balancing, and leeward mark trap, Marblehead had converted to a 1,2,3 and basically sealed the regatta win.
The regatta hosts (Chairman Tony Smythe), race committee (PRO Joel Scott), judges (chief judge Steve Shepstone), and the rest of the TCYC team did a fantastic job of running the regatta and is one of the highlights of the Sonar regatta calendar for the attendees.
ROCHESTER YC SET TO HOST TWO MAJOR REGATTAS:

During your spring cleaning, free up space in the garage, shed, basement or wherever else you are storing those old Sonar sails and equipment you don’t use.  The USMMA Sailing Foundation, Inc. is a 501(c)(3) entity which will accept your donations to support the six Sonars raced by the USMMA midshipmen locally and in Sonar Class sanctioned events.  All donations are tax-deductible and you will receive documentation supporting your deduction.  Contact Rick Dominique USA 652 - FINE LINE for more information and to arrange pickup.  Dominiquer@usmma.edu 516-726-6036.

Sonar Fleet #23 at the Nyack Boat Club would like to invite you all to this year’s annual Tappan Zee Challenge. The event will take place May 19/20 2012 and we are looking forward to a great weekend of racing. Last year was another great year for Sonar sailing on the East Coast with many regattas and more team racing then I have done in a long time - and we would like to keep that momentum going!

Please "Save the Date." The NOR and registration information is posted on the Sonar Class website (The NOR is also available by clicking on the link below). Online registration is also open and can be found at http://www.sonar.org/

If you could please send me a quick reply to this email letting me know if you think you can make it (so we can get a rough initial count) it would be much appreciated!

** We have some very nice shirts this year (mesh wick-away) and as a bonus, if you register on time, we will be able to have your Hull Numbers stitched onto the shirt under the logos.   We will have teams ready to assist you when you get there, we will have moorings allocated to visitors, the R/C is preparing interesting courses, and we expect to have a great party -- now all we need is you.

Sonar Fleet #23 looks forward to seeing you there.

P.S. If you have any question, would like to crew, need crew, etc.. please email me or call me anytime.  Michael Leinweber
email: mrleinweber@hotmail.com
phone: 347 - 834 - 3415

The NORs for the 2012 season are starting to come in. If you are interested in sailing in a particular regatta, check in with the SCA website (http://www.sonar.org/) to see if the NOR has been posted.


The NOR for the 2012 Tappan Zee Challenge, hosted by the Nyack Boat Club, is now available. You can access the document by clicking here: TAPPAN ZEE CHALLENGE NOR

The NOR for the 2012 NAs, hosted by the Rochester Yacht Club, is now available. You can access the document by clicking here: NORTH AMERICAN"S NOR

REGISTRATIONS ARE OPEN FOR THE DELTA LLOYD REGATTA 2012!

This year the Delta Lloyd Regatta will take place from Tuesday 22th until Saturday the 26th of May in Medemblik, the Netherlands. During this week participants from all kinds of different Olympic sailing classes will compete against each other including the Sonar class. This year the event will celebrate its 28th anniversary.

For more information, go to http://www.deltalloydregatta.org/. This site will be updated regularly so check back often.

We hope to see you soon.

The Notice of Race for the tenth annual C. Thomas Clagett Jr. Memorial Clinic and Regatta, scheduled for July 6-9, 2012, is now available online at www.clagettregatta.org.

As North America’s premier event for sailors with disabilities, “The Clagett” is open to both U.S. and foreign competitors and will, this year especially, be an integral part of preparing athletes for the 2012 Paralympic Games when the event takes place at Sail Newport, Rhode Island’s community sailing center.  Traditionally held in late-August, the move to July will facilitate additional athlete training prior to the Paralympic Regatta which takes place the first week of September in Weymouth, England.

For the last two years, the singlehanded 2.4 Metre has been open to able-bodied sailors which doubled the number of competitors on the starting line.  Starting with the 2012 event, able-bodied sailors may also compete in the three-person Sonar which will be raced with mainsail, jib and whisker poles.  The inclusion of able-bodied competitors translates into stiffer competition which makes for the best possible training opportunity for the Paralympic competitors and also reinforces The Clagett’s mission of providing sailors with disabilities the opportunity to improve their skills and reach personal goals through coaching and competition.

The class website has some great articles to help you with boat prep and speed. Two articles, written by Peter Galloway can be found here:

In Search of Speed

Other go fast articles can be found by clicking on the Library tab on the home page then selecting Articles.

http://sonarclass.blogspot.com/
Posted by Unknown at 10:33 AM No comments: